Quad-GPU builds with a case!

I have posted a followup to this post!  Read here for my rack case experiences

I'm quite aware that many people in this realm don't believe in cases.  The more GPUs you can hang out in open air, the better.  However, not everyone can do that.  Some people have reasons to need a cleaner setup - either because they don't like the clutter of a box hanging everywhere, or because they have someone else living with them who says "NO" to a huge mess of cables. 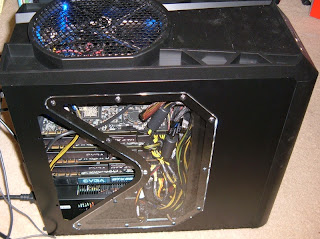 Read on for details...

I've found a setup that works very, very nicely for this.  It's not as dense as the open air systems, but for a tight, tidy box that keeps GPUs at a good temperature, it's hard to beat this.

Antec Nine Hundred Two V3 - This is an excellent case with an important feature: It has 8 expansion slots!  This allows you to cram 4 double height GPUs in instead of the usual 3.  It also comes loaded with fans, including a HUGE top exhaust fan.  The only downside is that case is by a company who believes "The bluer, the better."  The blue LEDs are EVERYWHERE in the case, and it can light a room at night.  Not for dorm rooms or bedrooms...

MSI 890FXA-GD70 - This is a solid AMD mainboard that supports 4 double-height GPUs.  Combined with the Antec case listed above, you can comfortably fit 4 GPUs in the system.

I did mod the Antec case slightly.  The side panel has a mesh area with plexiglass behind it that is designed to hold a fan.  After checking out the airflow, I removed this entire area, leaving it open.  I could put the mesh back in if I wanted to, and I probably will, but by removing this plexiglass, I've opened up a big vent into the side, right by the GPUs.  With the top fan blowing out, I suck a good bit of cool air in over the side of the GPUs, as well as the air blasting in from the front fans.  Obviously, all the fans are turned up to max.

The other note is that if you use a GTX580 or similar, you will have clearance issues with the hard drive cages.  I have my drives in the middle cage, leaving the lower cage clear to handle the end of the GTX580 installed down there.  If the full case were loaded with 580s, 595s, or similar long cards, it would require mounting the hard drive in an adapter up high.  Or netbooting.  As I only have one 580 right now, this is not a major concern. 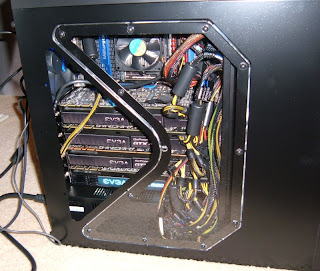 The end result?  A nice, clean build that can safely be tucked where wives/girlfriends/etc will see it, and they shouldn't mind too much!  Yes, I could clean up the cables more.  No, I don't care to.
Followup to this post:
The build worked decently, but my GPU temps were too high.  Despite the airflow the case offered, GPUs were still regularly seeing temperatures over 100C, which is too hot.  I resolved it by moving to a 4U rackmount case, as described here.
Posted by BitWeasil at 9:26 AM