But... still.  I decided to go benchmark, because I don't like saying something sucks without good cause. 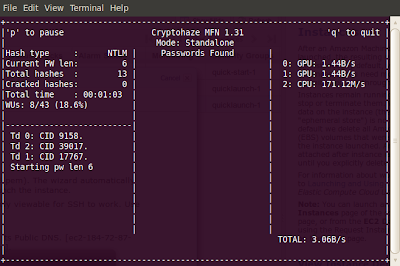 I know, I know - glacially slow compared to "modern hash cracking rigs" - but how much does it cost to do?

But what about spot pricing?  Amazon clearly isn't having them heavily utilized, because their spot price is $0.346/hr right now.  And that, my friends, works out to $213.  Which is a whole lot more interesting - especially since that's the total cracking cost, if you use one instance and a month, or a bunch of instances and a lot less time.

Just something to think about...

Updated July 31 2012
If you are looking to actually do this, http://blog.cryptohaze.com/2012/07/installing-cryptohaze-on-amazon-ec2-gpu.html has links to the scripts to do so.  And the speeds are even better, making the cost less!
Posted by BitWeasil at 12:09 AM